Leaving Iceland with a heavy heart

Hello faithful readers of the Elkem trainee blog! It has now been 8 months since I packed my bags and headed for Iceland, and I honestly have no clue where the time has gone since then. With only a few days left of my stay here, I thought I would use this opportunity to share some of my experiences from the land of ice and fire.

When I first arrived in Iceland in mid-April, I didn’t really have any idea what to expect. How bad can the Icelandic weather get? Do I have to eat fermented shark every day in the cafeteria at work? Is it true that you can put “-ur” at the end of all Norwegian words to make them Icelandic? I quickly realized I had much to learn about this charming little country. Picture: My fellow trainee Bård advised me to include a picture of a waterfall in this blog post. So, here’s me and an Icelandic waterfall

The first thing I quite harshly discovered was that my expectations of learning Icelandic within the first month were completely unrealistic. Even though there are a lot of similarities between Norwegian and Icelandic, I found spoken Icelandic close to impossible to understand when I first arrived. And it definitely did not help that the Icelanders often speak in a ridiculous tempo, especially when excited about something (which they usually are). And my plan to just use Norwegian words with an “Icelandified” ending (such as -ur or -ar) and be fully understood turned out to be more optimistic than selling sand in a desert. Picture: My face on my first day of work when I realized nobody really understood me if I said “Eg heitur Sofie”. Not that odd, considering I was basically saying “I hot Sofie”.

As I got over my initial language shock, several discoveries were lined up in the coming months. First of all, the amount of sheep in Iceland is not exaggerated, and I’ve definitely never seen (or eaten) as many horses as I have in the last 8 months. Second, Iceland might be the only place with steeper prices than Norway, and the most common form of tobacco here is nose tobacco which is supposed to be sniffed (a concept I still find extremely odd). On a more positive note the food in the cafeteria at work has not once been shark or sheep head, and the nature in Iceland is every bit as beautiful and full of contrasts as the travel advertisements say. 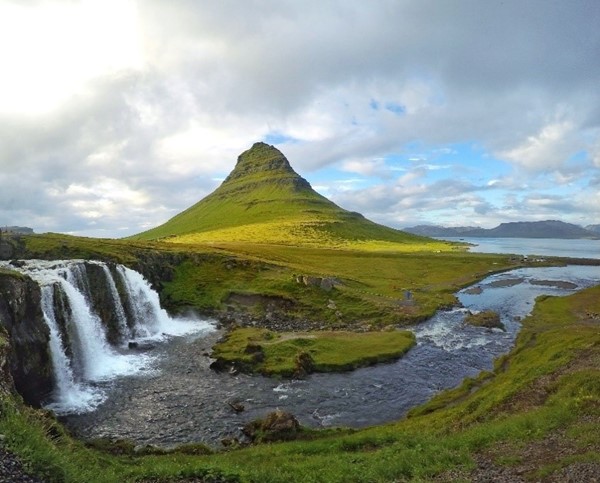 Picture: From a road trip to the insanely photogenic Kirkjufell and Kirkjufellsfoss

As this is my first trainee period in a ferrosilicon producing plant, my only work-related expectation was “FeSi production is probably very complicated”.  And I quickly discovered that I had a lot to learn about more or less everything in a metal producing plant. Fortunately, I’ve had the opportunity to be involved in several projects covering anything from the raw materials we feed into the furnace, to refining of the metal we tap out of it. My tasks and projects the last 8 months have been interesting, challenging and rewarding, and I’ve probably never learned as much (or as quickly) as I have with support from the skilled and motivating production team here at Elkem Iceland.

Which brings me to the most important thing I’ve learned during my stay in Iceland, namely the nature of its inhabitants. Even though they may seem rugged and tough, the Icelanders are genuinely kind and including people with a great sense of humor, and they are without a doubt what I’ll miss the most when returning to Norway. Not only have my coworkers kindly set aside time and energy to help me learn and make me feel welcome at work, they have also graciously included me in their social lives and hobbies. I will for instance never forget the ATV-trip with the starfsmannafélag, joining aqua-zumba with our sporty HR manager Þóra as the instructor, the countless pizza nights with my Akranes squad or going hiking and to football games with the operators. And as I leave Iceland with a very heavy heart in a couple of days, I know that it will be with a sjáumst seinna rather than a goodbye.